Elvis for Breakfast, Ribs for Lunch

The carful of kids wake up early in Memphis, Tennessee, after coming in from Arkansas; we are headed to Graceland, the iconic enclave of Elvis Presley before the crowd arrives. There will be tour buses bringing fans from all over the world and we would like to be there first.

We buy four tickets ($32.40/college student and $16.00/kids 7 to 12) and get in line for the bus. As the carful of kids are whisked through the entrance gates, we get a brief history of the legend. My first impression is how modest the outside of the home is, not nearly as large as I would have thought.

Our tour guide walks us through the public rooms of Elvis’s house, the first floor, the basement and the legendaryJungle Room. Don’t blink or you will miss it; the tour moves fast. Once outside, the group tours the other buildings, including the Trophy Building and the Racquetball Building, where the iconic jumpsuits are on display.

The carful of kids finish the tour in under two hours but you can make a day of it. We see the highlights of the legend and we are satisfied–the carful of kids are a little young to be die-hard Elvis fans.

Next up is the Peabody Hotel Ducks that ceremoniously march downstairs from their Royal Duck Palace on the roof to swim in their marble fountain at 11 a.m. and 5 p.m. daily. The regally-dressed Duck Master adds to the production. This is a must for kids, but get there early for the best seat, the lobby will be full.

The carful of kids are hungry after the duck parade so we head over to Charlie Vergo’s Rendezvous for some ribs. From his basement, Charlie Vergo’s Rendezvous has been serving up his charcoal broiled ribs since 1948. It is a Memphis institution and should not be missed. The kids, Melissa and I devour a couple of large orders of ribs and leave nothing but bones in return.

With full bellies, the carful of kids drive over to Sun Studio for a tour of

the legendary recording studio–where Johnny Cash, Elvis Presley and Ray Orbison, among others, have all cut tracks. This is an intimate behind-the-scenes tour and our tour guide adds to the enthusiasm.

I am a huge Johnny Cash fan and worked for record label so I enjoy the details and memorabilia. The kids love the fact that they are able to sing into the old microphone. If you have a limited amount of time in Memphis, this is your stop.

With a few highlights of Memphis under our belt, the carful of kids look east, I have drive to Asheville, North Carolina, that’s 500 miles away.

Up Next: The Blue Ridge Parkway and Shenandoah National Park. 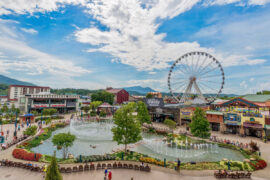 33 Fun Things to do in Pigeon Forge and Gatlinburg 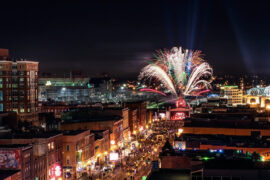 Nashville in a Weekend