Your Guide to Toy Story Land

Whatever you do, don’t skip Hollywood Studios on your next trip to Walt Disney World. New for Summer 2018, Toy Story Land offers the first glimpse of what’s ahead. With more to open in 2019, Hollywood Studios will transform offering new lands to experience and new transportation options too.

No surprise here, Toy Story Land is perfect for kids of all ages. Towering versions of our favorite toys can transform a 6-foot dad into a kid again.

With Tinker Toys used to frame the 11-acre playful land, walk into an area designed for kids of all ages. The green army men march keeping order. Of course, Buzz and Woody are at the ready for a family pic. And the melodic green aliens take over a corner of Toy Story Land.

Walk under the giant Christmas lights strung along the walkways. See a cheery new entrance for Toy Story Mania. And Slinky Dog bounces through Andy’s backyard delighting the young-at-heart.

Of course little kids love Toy Story Land, the surprise is how much older kids and adults love the new addition to Hollywood Studios. With rides for kiddos who measure 31” and 39” tall, Toy Story Land is fast becoming a family favorite for everyone. 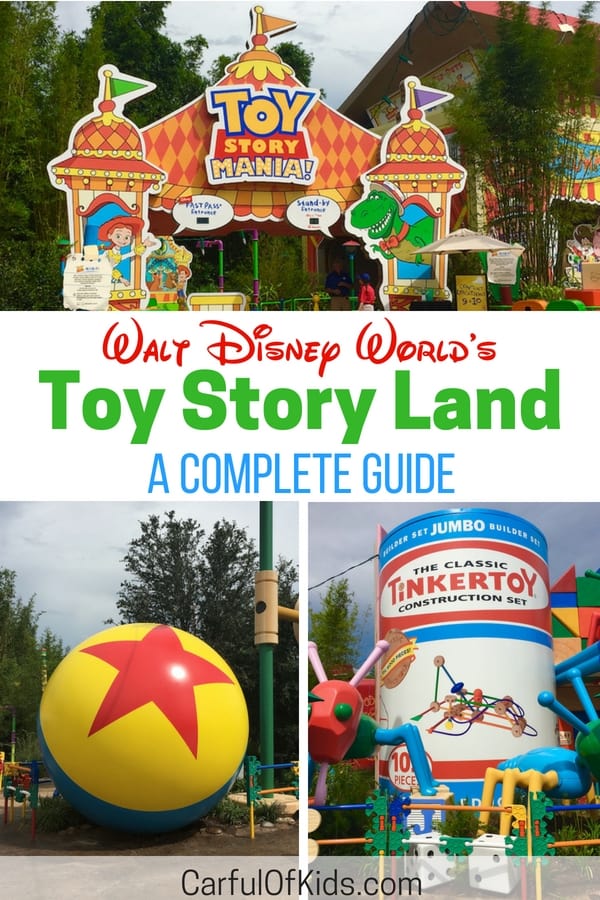 Hard to make everyone’s favorite ride better but Disney did it. By adding another track, now three in total, riders will spend more time scoring and less time waiting.

The arcade-style shooting game is fast and fun for the whole family. Who knows, Mom might be the high scorer.

The entrance has been moved into Toy Story Land with a fun, fresh façade. And Fast Passes are available.

Hop aboard a happy dog coaster as it romps across Andy’s backyard. Don’t let the name fool you, Slinky Dog Dash offers some quick turns and deep dips along with belly laugh-inducing humps.

See Rex and Jessie along the ride. Then half way through, the Slinky Dog cars stop, pull backwards and launch. A favorite with kids of all ages. Don’t let the older kids sit this one out, teens love this coaster.

The minimum height requirement is 39”. And Fast Passes are available.

Carful of Kids Tip: Slinky Dog Dash is a bit longer and more aggressive than Magic Kingdom’s Barnstormer. More along the lines of Seven Dwarfs Mine Train if you’re trying to decide if your kids are up for it.

The endearing green aliens from the Pizza Planet restaurant have landed in Toy Story Land. Hop aboard and the aliens pilot kiddos and their families around a covered ride. Spinning in figure eights, the Swirling Alien Saucers are spinny enough for big kid thrills.

Carful of Kids Tip: If the teacups in Magic Kingdom give your kids that icky stomach feeling then Swirling Alien Saucers might be a skip. For riders 31” and taller and Fast Passes available.

Kids love that moment when their favorite characters come alive. And the Toy Story characters especially are beloved.

Find Buzz Lightyear, Woody and Jessie all available in Toy Story Land for character meet-n-greets. If you miss them, then take your kids by the larger-than-life statues sprinkled throughout Toy Story Land.

Where to Eat in Toy Story Land

If the kids are getting cranky then head to Woody’s Lunch Box. Serving breakfast, lunch and dinner, sample the S’more French Toast in the morning. Or find sandwiches like BBQ, smoked turkey and a grilled three-cheese sandwich.

As a bonus, find adult beverages at Woody’s Lunch Box too. The Grown-Up Lemonade was my favorite. And the root beer floats offer a tasty treat for everyone.

Peek over the back wall of Toy Story Land, see Galaxy’s Edge take shape. It’s an ambitious new experience that seems to be wowing everyone with its massive scale. Shrouded in scaffolding, the new Star Wars-themed area will transport fans to the Outer Rim and Wild Space.

As a new way to experience Star Wars, visitors will live their own adventure as they explore the Black Spire Outpost, an infamous stop for adventurers on the planet Batuu.

On track to open late fall 2019, Galaxy’s Edge is a must for fans. A new hotel experience is also in the works though will open after Galaxy’s Edge.

Also up for Hollywood Studios, find a new attraction coming to the now closed Chinese Theatre. The Mickey and Minnie’s Runaway Railroal will have riders step through the movie screen to experience the wacky world of a Mickey Mouse cartoon short. It will be the first ever Mickey-themed ride-through attraction.

And finally, a new way to get around. New for 2019 find an aerial tram, the Skyliner,at Hollywood Studios.

With 10-person gondola cars, Epcot and Hollywood Studios will connect with Caribbean Beach Resort. Additionally the Art of Animation and Pop Century value resorts will also be on the new aerial tram line. 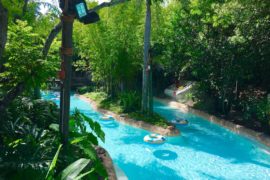 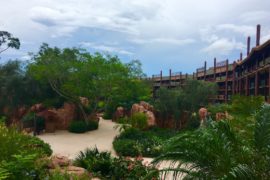