11 Places to Explore in Montreal with Kids

Montreal offers families an urban city center with a French flair. Where Quebec City offers old-world appeal and North American history. Montreal is modern city with expansive museums and urban parks to explore. Read on for what to do in Montreal with kids.

What to do in Montreal with Kids

Plan ahead and take a picnic lunch or dinner. Large city parks are a great place for kids to unwind and I like to include them in my road trip itineraries.

Some come to explore the church building though we want to see the views of the city. Climb to the top of the stairs and enjoy the view, especially at night.

Commissioned in 1904 St. John’s Oratory is a Roman Catholic Church. St. John’s boasts the third-largest dome in the world and is a National Historic Site of Canada.

Located at 3800 Queen Mary Rd. find parking at the base of the church hill. Free 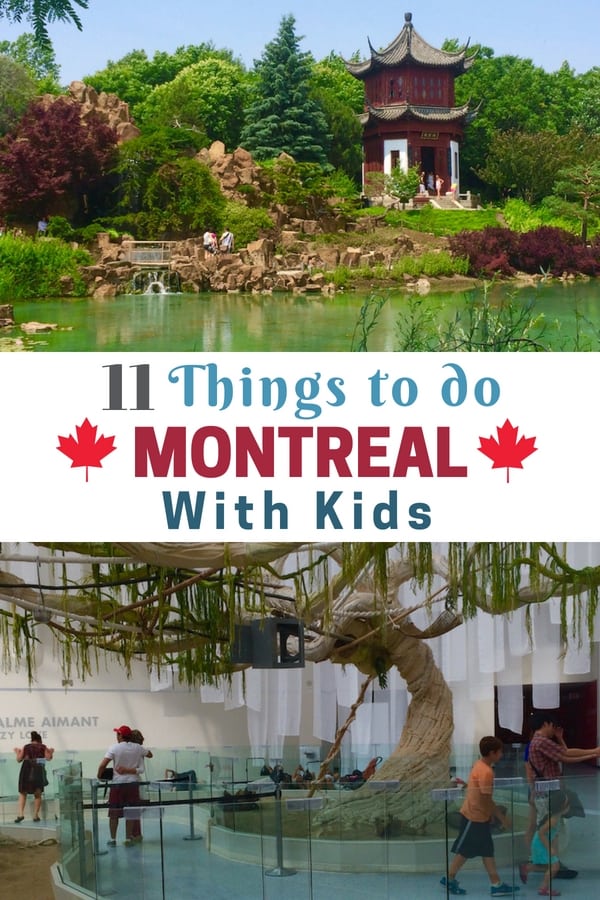 A must for families, the Space for Life is a museum district. Spend at least a day exploring or more if you really enjoy gardens. It was the original site of the 1976 Summer Olympics though completely redeveloped.

Located at 4101 Sherbrooke and parking is available at 4581 Sherbrooke Est. Parking is $12 and my Toyota RAV 4 with a soft-sided roof carrier was considered an over-sized vehicle.

In a bright space, marvel at the humongous bugs of every color with your kids. Some are mounted and some are live specimens.

See a display of live carpenter ants as they work day-in and day-out cutting and carrying leaves. The ants aren’t encased within a protective glass display like they would be in the U.S. Instead the ant display features a moat, so close you could touch the ants.

Note: The Montreal Insectarium is closed for renovation until 2021.

Located next to the Insectarium, is the Montreal Botanical Garden. As one of the world’s best botanical gardens, it’s also a great destination for families.

I found unique playscapes and snack stands sprinkled throughout. Another family-friendly bonus, kids can run around and explore, even taking off their shoes in the grass. I just don’t tell my kids it’s a botanical garden and tell them we’re visiting a park.

Need a break, then visit the Botanical Garden Restaurant. Find fresh French-inspired sandwiches and salads that taste as fabulous as they look.

Buy a combo ticket for the Insectarium and the Botanical Garden. Adults tickets for $20.50CAN and youth tickets (5 to 17) for $10.25CAN with kids under 5 for free.

Explore the night sky at the Planetarium. Several shows shown throughout the day.

Open every day except Monday from 9 a.m. to 5 p.m. and open until 8 p.m. on Thursday, Friday and Saturday. Located at 4801 avenue Perre De Coubertin.

As the original 1976 Olympic velodome, the BioDome reopened in 1992. Now explore a collection of four different American eco-systems located indoors.

Travel from the tropical rain forest to a Laurentian maple forest, complete with living plants and animals, like an indoor zoo. Then visit the Gulf of St. Lawrence before exploring the sub-Arctic Islands.

Each exhibit replicates the light, temperature, plants, birds and animals–both land and water. Again the human visitors are minimally separated from the inhabitants. Kids and adults alike are mesmerized.

Note: The BioDome is closed for renovations and will reopen in 2020.

Another key area to explore is the pedestrian-friendly Old Port of Montreal. Find the waterfront parks along with street performers and notable architecture.

Located along the shores of the St. Lawrence River that’s been used for transportation and trading since 1611.

Located just off Place Jacques-Cartier, find an alley with artists and artisans for a unique souvenir.

Stroll special exhibitions ranging from animation to archeology. Add an IMAX film to the visit.

Visit the Gothic Revival basilica in the heart of the Old Port area of Montreal. A Catholic church first opened in 1682 but lost its luster and was demolished. The present church opened in 1830 and was elevated to a basilica by Pope John Paul II.

Adult admission for $6CAN and for youth (7 to 17) admission for $4 and kids under 6 and under are free. Take a guided tour, offered every 20 minutes and included in the admission.

Montreal hosts the largest and most prestigious fireworks competition in the world. Launched over La Ronde, the amusement park, spectators along both sides of the St. Lawrence River watch the bi-weekly shows.

Each show lasts 30 minutes and is accompanied by music, broadcast on a local radio station. Watch the shows each Saturday and some Wednesdays from late June until the first week of August.

What to Eat in Montreal with Kids

Crêpes—Sample crêpes, both savory and sweet, for a French-inspired treat. A paper-thin pancake, crêpes are filled with kid favorites, like ham and cheese or bananas and chocolate.

Poutine–The national dish of Canada and originated in the 1950s. Starts with a dish of French fries covered with brown gravy and topped with cheese curds. It’s really a stick-to-your-bones dish.

Where to Stay in Montreal

Downtown Montreal features urban hotels that cater to luxury travelers. And one hotel is an icon of the city.

During my latest visit to Montreal, I stayed at the Fairmont The Queen Elizabeth Hotel. Originally opened in 1958, it was completely renovated in 2017. Ideally located above the Montreal Central Station, find VIA, Canada’s rail system, steps from the hotel.

Notably John Lennon and Yoko Ono held their Bed-In in 1969 in room 1742. And this is where Give Peace a Chancewas recorded.

Montreal is a popular departure port for cruises, like Regent Seven Seas Fall Color Cruise. I departed Montreal in October 2017 and enjoyed a day of exploring.

I recommend the following guides for your trip. 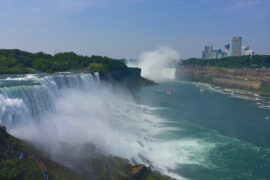 Niagara Falls and the Maid of the Mist 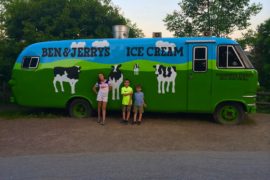 Top Things to do in Waterbury Vermont with Kids

12 Top Beaches in US for Families