Where to Find Dinosaurs in Texas

Always driving down the backroads of Texas, I’d was on a hunt to find some dinosuars. With a basic knowledge of paleontology and a map, I knew Texas was actually in a hot zone for dinosaur footprints and Ice Age skeletons. It didn’t take long to find both, well-preserved and accessible for most. Here’s the top places to find dinosaurs in Texas.

Ancient people  immortalized footprints in their pictographs in the Utah area, suggesting they had found dinosaur footprints. Though the official discovery of dinosaurs was in England in the 1820s.

Soon after in the 1830s, footprints were found in Connecticut. Though the real excavation didn’t start in the U.S. until the end of the 1800s with the Bone Wars. Two scientists  and their scientific discovery teams raced to the Rocky Mountains and discovered over a hundred new species between the two competing crews.

Then the natural museums got in the game and formed their own dig teams. Soon scientific dig teams dispersed across the continent to discover then fill museum halls with dinosaur discoveries.

Where to Find Dinosaurs in Texas

Back in 1909, a nine-year-old boy named George Adams uncovered a three-toed track in the Paluxy River embedded in limestone. Young Adams told his school principal then loaded up his schoolmates went on a field trip to see for themselves.

It was in 1936, New York City’s American Museum of Natural History dispatched Roland Bird to Glen Rose, Texas, to search for the tracks after one was found at a New Mexico Trading Post. When he arrived in town, Bird spotted a dinosaur footprint preserved in rock used in the Somervell County gazebo in Glen Rose

Officially the footprints are from theropods, meat-eaters that walked on two legs, probably the Acrocanthosaurus. Bird went on to find other footprints in the Paluxy River from a sauropod, a four-legged plant eater. In addition Bird found a collection of tracks of multiple animals demonstrating how they walked and lived.

After the discovery, the American Museum of Natural History  teamed up with the University of Texas for an official excavation with the help of the Works Progress Administration. Work began in 1940.

Dinosaur World features over 100 life-sized dinosaur replicas set among the landscape on a walk. Located at 1058 Park Road 59 in Glen Rose. Admission.

Glen Rose is about 50 miles southwest of Fort Worth.

With 1,500 acres alongside the Paluxy River, this Texas State Park is also a National Natural Landmark. Purchased in 1968, the state park opened to the public in 1972. The big draw is the dinosaur footprints in the river though the park offers camping, picnic table along with a playground.

Upon entering, it’s impossible to miss Sinclair Oil dinosaurs from the 1964-65 World’s Fair in New York. Your dino lovers will want to get a pic with the mighty Tyrannosaurus Rex and the long-necked Apatosaurus.

After the initial discovery in 1936,  Peter Rose of Southern Methodist University determined that the sauropod was a new species. Named the Paluxysaurus jonesi, it was thought to be 60 to 70-feet long and 12-feet tall with an enormous neck and tail. In 2009, it was named the official dinosaur of Texas.

Find 44 campsites with electricity inside the Dinosaur Valley State Park. There’s is also 20 miles of hiking trails in the park.

Top Spots to Explore in Salado

Guide to Bastrop in Central Texas

Old, yet not dinosaur old, or even dinosaurs. Mammoths are prehistoric animals from the Ice Age that started 2.5-million years ago. Dino kids will tell you that most dinosaurs share anatomical features in their hip bone structure and the mammoths are not related.

In Texas, glaciers didn’t cover the land during the ice age. Columbian Mammoths, Texas natives, were the larger and less furry of the North American species. The more popular species, the  woolly mammoths lived further north.

About 65,000 years ago, a nursery herd of mammoths died in the ravine. Adult females along with their young might have got caught in a flash flood. This area also trapped other prehistoric animals in the mud, preserving them.

In 1978, Paul Barron and Eddie Bufkin, both in their early 20s, stumbled upon a bone sticking out of the ground. Digging it up, they took their find to nearby Baylor University. Soon after a discovery dig was organized. During the dig, some of the bones were encased in plaster jackets and moved to Baylor University for further study. Other discoveries were left in situ, or in place in the creekbed.

Recently declared a national monument, see the nursery herd of mammoths as they were discovered, one of the few sites in the U.S. that’s enclosed in a climate-controlled structure. In addition to the mammoths, find a camel bone as well as a saber-toothed cub tooth.

Start at the National Park Service Visitor Center, then stroll through native vegetation to the dig shelter. With elevated walkways, see the bones from above with archeological markers still in place. It’s a must for budding paleontologists.

Musts for a Visit to Waco

Top Things to do in Dallas

Best Museums with Dinosaurs in Texas

Always a stable, find dinosaur exhibits in most urban centers in Texas from H-town to the Big D. Get towering replicas of skeletons and dinosaur digs for the kids.

Perot Museum of Nature and Science in Dallas

Perot Museum of Nature and Science boasts Texas’ own Alamosaurus along with the favorite, T. Rex in the T. Boone Pickens Life Then and Now Hall. Located at 2201 N. Field Street in Dallas.

The Houston Museum of Natural Science put its dinosaurs in action in the Morian Hall of Paleontology. Find the skeletons in pursuit or running from the meat eaters. Located at 5555 Hermann Park Dr. in Houston

The Witte Museum features the Acrocanthosaurus whose footprints were discovered in nearby Government Canyon State Natural area. See a T. Rex and discover a bone in the Dino lab. See a giant ancient alligator, the Deinosuchus, too. Located at 3801 Broadway in San Antonio.

From Baylor University’s collection, learn more about prehistoric Texas in the Strecker’s Cabinet of Curiosities. In addition to fossils, the Mayborn will host a special exhibit starting in early June until the end of September.

Learn more about Texas dinosaurs and fossils in the Hall of Geology and Paleonotology. The Great Hall offers treasures like the Quetzalcoatlus northropi, the Texas Pterosaur that was discovered in West Texas by the University of Texas.

Other Places with Dinosaur Tracks

The Leander Dinosaur Tracks are in a creekbed near U.S. Highway 183. Parking is located near 601 S. Gabriel Dr. in Leander, Texas. Free to enter.

West of San Antonio, visit at 12,000-acre natural preserve with 40 miles of trails along with camping. Take the Joe Johnston Route for 110-million-year-old dinosaur tracks. 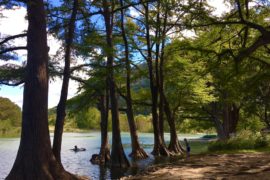 Top Things to do near Garner State Park 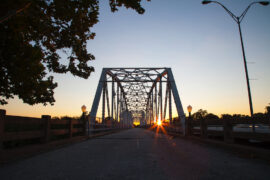 Top Things to do in Bastrop Texas 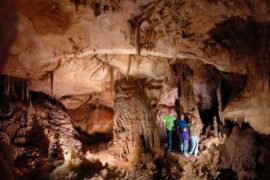