Head to New York City for a getaway packed with history, museums and every food imaginable. New York City offers more museums it boast more than 10 national park sites. From the Statue of Libery to the Stonewall mononumet, find National Park sites across the city. Here’s a list of the best New York City National Parks with kids.

Guide to the Best Museums in New York City

Best Places to Feed a Teen in NYC

Visit the symbol of freedom and liberty known world-wide on a 12-acre island in New York Harbor. Though most visitors are surprised to find out it’s a national park. Learn about it momemental construction and how it made its way from France to New York City.

Operated by Statue Cruises, the ferry departs from Battery Park in Lower Manhattan. Explore the Statue of Liberty first then re-board the ferry to tour Ellis Island, an additional stop. First ferry leaves at 9:00 a.m. and last one departs at 3:00 p.m. with extended hours during peak seasons. Ferry ticket required for everyone and admission based on age.

Note: For 2021, the pedestal and crown remained closed and theaters operate at reduced capacity.

From 1892 until 1954, Ellis Island welcomed 12 million immigrants to the United States. Learn about immigration or look for family, Ellis Island Immigration Museum walks visitors through the facility that processed close to 5,000 people a day.

This National Park site is right next to Statue of Liberty’s ferry dock. Originally built from 1808 to1811 as a fort, the building transitioned from defense to immigration. Before Ellis Island opened, 8 million people passed through Castle Clinton onto a new life in the U.S.

Note: Closed in 2021 for renovations.

Located in Battery Park at the tip of lower Manhattan, the Castle Clinton National Monument is open seven days a week from 7:45 a.m. to 5 p.m. Free to enter.

One Day Guide to Boston

Walk through history in a preserved tenement building in the Lower East Side. Tour the building that housed 7,000 working class immigrants from 1863 until 1935. With specialized tours focusing on Irish immigrants, Jewish immigrants and sweatshop workers along with neighborhood tours, get an understanding of an immigrant’s life over a hundred years ago.

Stonewall National Monument doesn’t a visitor center. Though the monument includes Christopher Park, located across the street at the intersection of Christopher Street and W. 4th St. Free to enter.

Walk through a Victorian era townhouse where Theodore Roosevelt, the 26th U.S. president, spent his childhood. With five decorated rooms, learn about how “Teddy”, a sickly child, used exercise to strength his body and spirit. Learn about the final resting place of more than 400 African-Americans in lower Manhattan. A mass burial site from the 17th and 18th century retells the story of free and enslaved people in colonial New York.

The visitor center is on first floor of the Ted Weiss Federal Buildingat 290 Broadway in lower Manhattan. The Visitor Center is open Tuesday through Saturday from 10 a.m. to 4 p.m. and the outside memorial open until 5 p.m. Free to enter.

Note: The Visitor Center is closed until further notice.

Quietly protecting New York City, Governor’s Island served as a military post and command headquarters from 1794 until 1966. Now it is a recreation area for warm weather from May 1 until October 31.

Located in the New York Harbor, take a ferry (adults $2 and kids under 13 free) from Battery Maritime Building or Pier 6 in Brooklyn.

One Day Itinerary to Acadia National Park in Maine

Niagara Falls and the Maid of the Mist Guide

Visit the largest mausoleum in North America at the General Grant National Memorial. Former President Ulysses S. Grant and his wife, Julia, reside in the 1897 granite and marble tomb.

Located on Riverside Drive and 122nd Street, the visitor center is open from Wednesday to Sunday from 9 a.m. to 5 p.m. Free to enter.

Note: The Visitor Center is closed until further notice.

What to do with Kids at National Parks

Most national park sites in New York City offer Junior Ranger Programs. Ask a ranger at the visitor center for a booklet to complete, based on age. 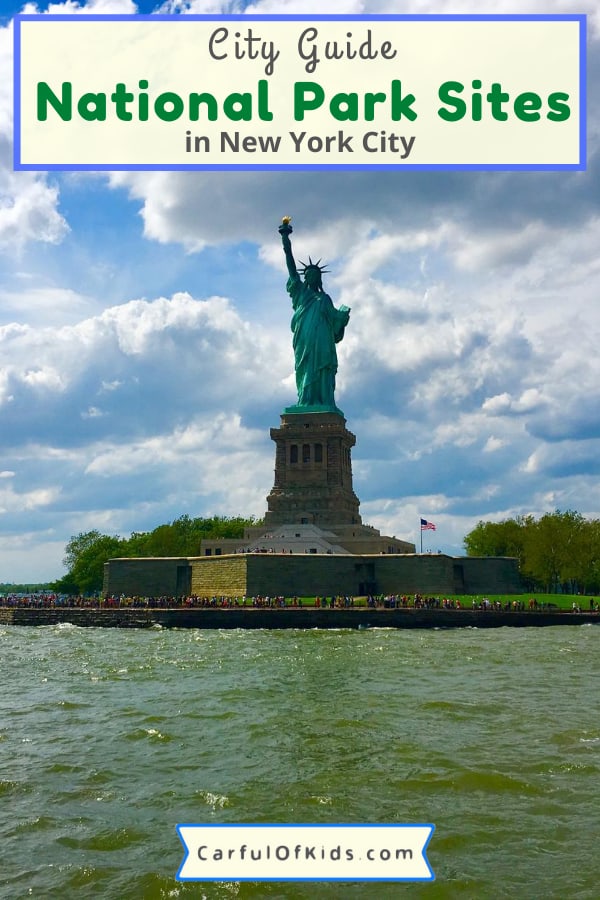