The haunting season is upon us, like the autumnal fog that carries spirits from the past. Texas is home to dozens of haunted hotels and every major city offers at least one of record. Though some cities are particularily haunted, like favorite San Antonio or beach getaway Galveston. For those who yearn for more goosebumps that goose down pillows on their next getaway, here’s the top haunted hotels across Texas.

Routinely named as one of the most haunted cities in the U.S., ghosts linger at street corners and some live in the hotels of San Antonio. With the Alamo anchoring the downtown, some claim spirits still linger nightly in the oldest part of the city.

Finished in 1909, the one of the Gunter Hotel’s more noteable guest was an unknown blues musician.  In the 1930s, a talent scout set up a temporary recording studio in Room 414 for a guitar players from the Mississippi Delta. Over three days Robert Johnson recorded 16 tracks  for a blues album.

Then he died tragically under mysterious circumstances in 1938. Johnson’s influence over the blues and rock and roll genres earned him a posthumous Grammy Award and induction into the Rock and Roll Hall of Fame. On the sixth floor, housekeeping is rumored to clean in pairs.

Opening in 1859,  the Menger Bar is made with carved cherrywood and features a mirrored back bar, like  a London club,. In 1898, Theodore Roosevelt recruited men for his Rough Riders between drinks. Over the years The Menger’s bartenders claim Teddy Roosevelt still sits at the bar beckoning them for a drink.

In addition to Teddy Roosevelt, The Menger Hotel is home to dozens of spirits. In its early years, the wealthy of the area would check in sick relatives. Some would not walk out.

Located at 204 Alamo Plaza, next to the Alamo.

Some of the other haunted hotels of San Antonio prefer to bury their ghostly past under new wallpaper and a coat of paint and not be named.

Guide to the San Antonio Missions

Top things to do in New Braunsfels

The Haunted Hotels of Galveston

The Hurricane of 1900 blew ashore during the night, leaving piles of descruction at the break of dawn. It is estimated that at least 6,000 people died. For this reason, Galveston remains one of the most haunted cities in Texas.

After the popular Beach Hotel burned to the ground, the Hotel Galvez replaced it in 1911. Named after the city’s namesake, Bernardo de Galvez, it’s the Grand Dame of the Seawall and an excellent choice for guests who want luxurious appointments along with a ghostly past.

According to local lore, the haunting of the Galvez is based more on urban folklore that documented experience. Though the tale of the Love Lorn Lady looking for her lost love still continues to circulate.

With Gulf of Mexico views, the palm-flanked drive leads guests back to a more gracious era with period furnishings and generous common spaces. The outdoor pool area offers ample room for lounging. The hotel serves one of the top Sunday brunches in Texas in its historic lobby.

Located at 2024 Seawall Blvd. in Galveston.

As the third reincarnation of the The Tremont House, the newest hotel sits in the heart of the most haunted area in Galveston. The first Tremont opened in 1839 then was destroyed by a fire in 1865. In 1872 the second hotel opened and withstood the 1900 Hurricane to be demolished in 1928. In 1985, the current hotel opened in the restored Leon and H. Blum building.

According to local legend, a mischievous prankster, Jimmy, calls the Tremont House home. He’s been known to play tricks by moving objects and if you knock of the elevator door, Jimmy might knock back.

Best Things to do in Corpus Christi

As the Capital of Texas, interesting characters gather regardless if the state legislature is in session.

Built in 1886, a cattle rancher named Col. Jesse Driskill wanted to own the finest hotel south of St. Louis. After a drought and a harsh winter, he sold the property. As the oldest operating hotel in Austin, the Driskill Hotel has been the home of the inaugural balls for Texas governors since it opened.

Thought to be one of the most haunted hotels in Texas, it is the eternal home to several ghosts. Col. Jesse Driskill is thought to haunt his own hotel. Unable to commit to an earthly life with their grooms, a pair of brides spend their time in-and-around the bridal suite. Each committed suicide a couple of decades apart.

Another young  girl fell down the grand staircase while playing and thought to be a playful spirit. Room 525 and the fourth floor allegedly harbors the most paranormal activity in this iconic hotel in the middle of the Austin entertainment district.

Most think historic hotels are the only ones to harbor spirits, though newer properties can too. In downtown Austin, the Omni Hotel is a modern glass tower with 400 rooms and one unregistered guest.

A traveling salesman checked in on his last legs and an ill-placed call to his soon-to-be ex-wife sent him to the bottle. Shortly after,  he leap out of his room then his spirit bounced up and walked back into the hotel to stay for eternity.

Located at 700 San Jacinto in Austin.

In Texas, Dallas is known as the Big D, as well as the north Texas center for culture and the arts. Though who says ghosts don’t love luxury too.

Built in 1923, The Stoneleigh Dallas is an art deco hotel with interiors designed by Dorothy Draper, the designer of The Greenbrier in West Virginia. According to legend, the original hotel manager used some secret passages for his girlfriend, Margaret, to pass freely. One night clouded in mystery, Margaret fell to her death from the top floor and is rumored to still roam the property.

In 1912, Adolphus Busch, the beer magnate, opened the opulent Beaux-Arts hotel in Dallas. Over the years, the hotel hosted many dignitaries including Queen Elizabeth II and Prince Phillip.

Though  most guests want to know about the  jilted bride who continues to look for her finance at The Adolphus Hotel. Steps from the location of her ill-fated wedding ceremony, she supposedly she hung herself. It is also known as one of the top haunted hotels across Texas.

Top Things to do in Dallas

In a town that was equal parts cattle ranchers and cattle rustlers, gun fights sparked to life in downtown Ft. Worth at any time. More rugged than its North Texas neighbor, Fort Worth also offers a ghostly past.

When it opened in 1907 the Stockyards Hotel shined a Texas Ranger’s revolter, and guests checked in from all over the state.  One such guest was a cowboy, complete with boots and spurs. Some claim to see his image while others hear the the clomping of his boots and  the jangle of his spurs.

Though it was a couple that might be most remembered. Room 305 offers a prime lookout for both the bank and a police station across the street. Because of that detail, the infamous bank robbers Bonnie and Clyde came to the Stockyards Hotel. Alrighty quite notorious by this time, the local law caught wind of the duo and they moved on shortly after. Over the last 100 years, Exchange Street got paved and the Stockyards Hotel is now part of a National Historic District.

One the western horizon of Texas, the warm wind can carry ghostly spirits as well as dust.

The Hotel Paisano in Marfa

Marfa is no stranger to unexplained phenomenon with its mysterious lights floating in the desert. Built in 1930 by architect Henry Troshe, The Hotel Paisano served as a home base for actors, like Elizabeth Taylor, James Dean and Rock Hudson, during the filming of the epic film, The Giant in the 1950s.

Though its uninvited guests might be the stars of the hotel in the 21st century. Rumors continue to circulate that James Dean stayed on at the Paisano after the filming since he died shortly after his West Texas stay.

Located at 207 Highland St. in Marfa.

With its Big Bend location, the renovated hotel features southwestern design elements for a sense of laid-back luxury. Originally built in 1927, it was designed by the same architectural firm that designed The Hotel Paisano in Marfa.

According to local legend, a  ghostly spirit wanders the hallways of the historic hotel, rumored to be the original owner. Room 10 is especially active paranormal activity. 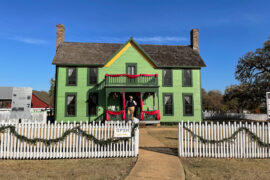 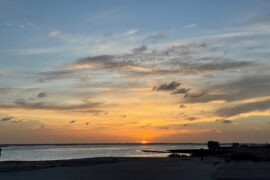 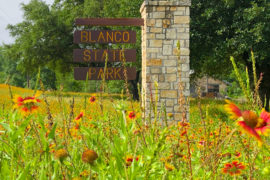 Grab the Marshmallows! Best Places for Camping in Central Texas